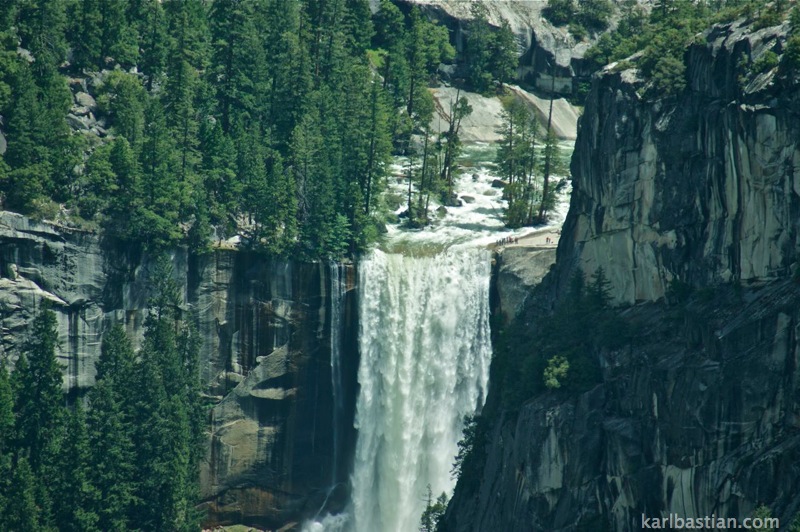 This is the second time I have been in Yosemite National Park when people have died on the Mist Trail. This past week, I have received so many e-mails and calls from concerned family and friends who heard about there being three deaths in Yosemite, since my family of three was there. I appreciated the concern, but we were safe. I wanted to answer, “We obey the rules.” Not to be trite or insensitive, but because when these tragedies occur they often unfairly cause people to see Yosemite as an unsafe place, when it isn’t. What it is, is a place that must be respected.

Now I must pause, and say something else – I am deeply saddened by these deaths. I grieve for the families, the loss of life – and hurt for those who are hurting right now. I have lost sleep over this. I know the place where this happened VERY well, so my dreams are vivid and I can picture the entire scene all too well. I am also angry with the heartless and cruel comments I am reading on many blogs and Yosemite websites that are downright mean – these people died as a result of foolish choices, yes, but not because of stupidity, and they did not “have it coming” nor do they deserve Darwin awards and the like. We all have made foolish and careless decisions in our lives – most behind the wheel of our cars – most do not cost us our life. So while this was a tragedy, it was not an accident. And while it was completely avoidable, sympathy for both the victims and those who loved them is in order, just as we’d want if someone we loved did something foolish and paid so dearly for it.

Nevertheless, there is a lesson for us all, in this. I’m not going to go into details of the events that occurred, other than are necessary for my point in posting about it. There are conflicting reports online – some sites have event edited there earlier reports, in part for accuracy, in part to spin it more kindly toward the victims as time goes by, which is understandable. The initial reports, I believe, were probably the most accurate in this case, though that isn’t always the case, since they were eye witnesses, I tend to believe the longer eye witness reports I read, though most of the reports have been shortened now. 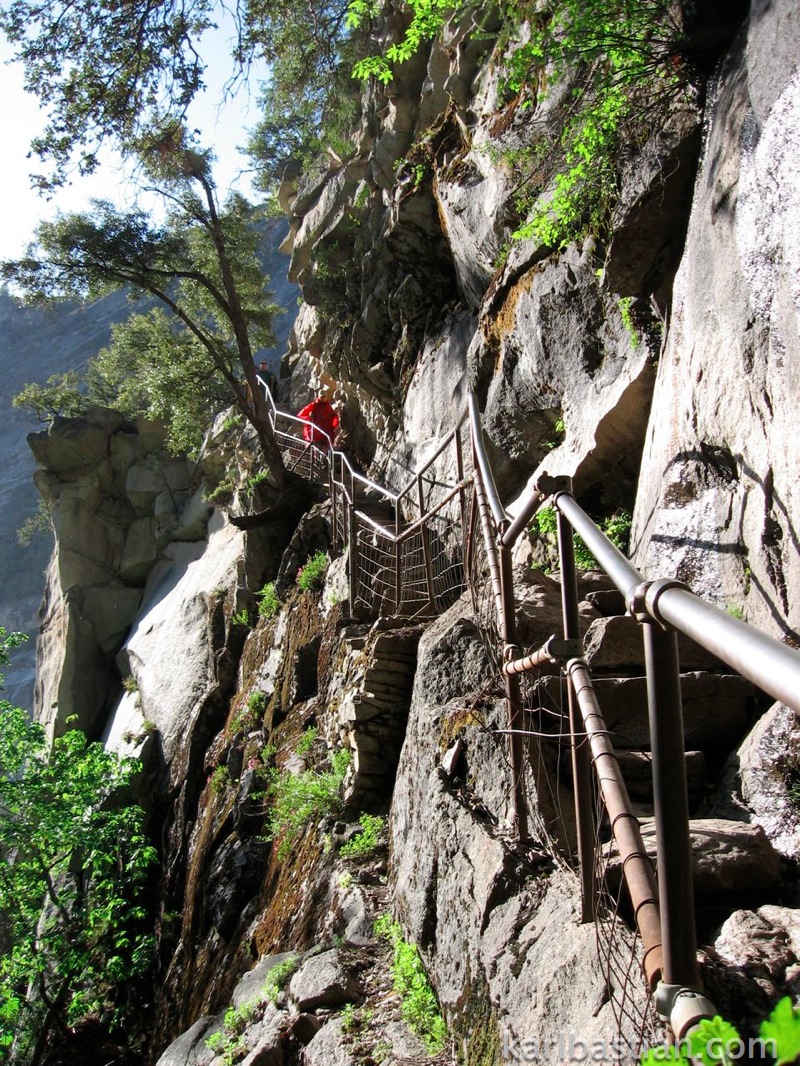 Me on the Final Climb to the Top of Vernal Falls

To give you an idea of the environment – people have asked about the guard rail, here is what the setting looks like. They went over the guard rail 25 feet up from the ledge. It can be deceptively calm and there can be solid dry rock over the rail and the water can look calm. But the flow on the surface can be deceiving. And the depth can drop quickly as you move out. This picture was taken with a zoom lens from Clark’s Point, which is pretty far away, but up and across from Vernal Fall: 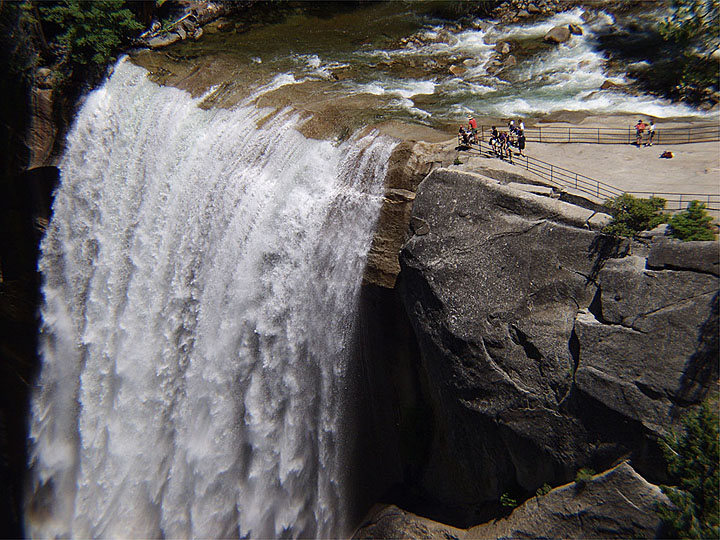 Here is the entire fall, zoomed back: 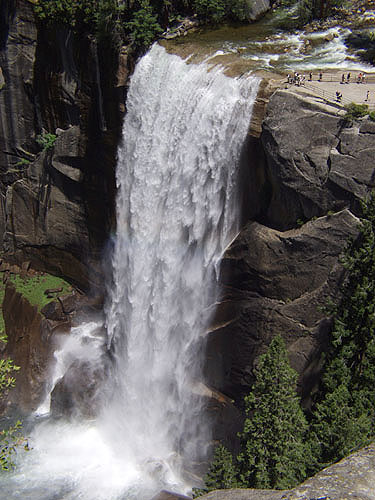 As you can see, it is not a fall you should be anywhere near the water. It is a fall that deserved fear in the biblical sense as well as literal. Here is what is important – those who perished, especially the first two, crossed a guard rail at the top of a very high and dangerous fall that was clearly marked so: 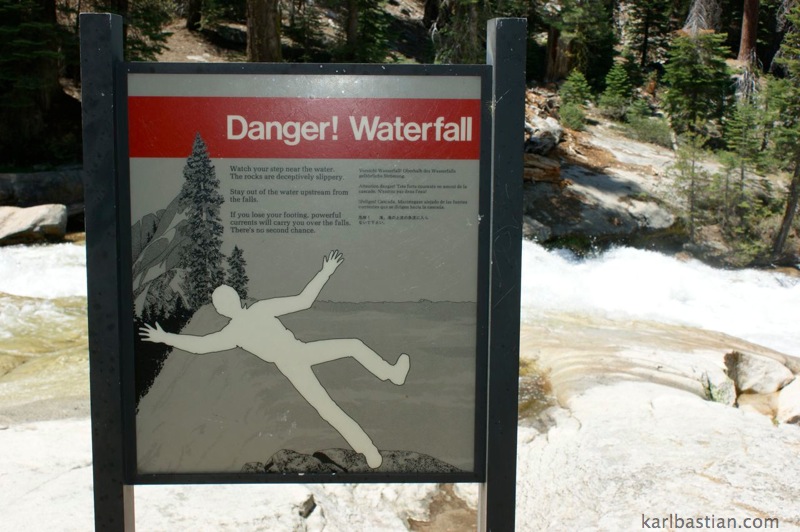 The Sign at Top of Vernal Falls (I took this)

Watch your step near the water.
The rocks are deceptively slippery.

Stay out of the water upstream from the falls.

If you lose your footing, powerful currents
will carry you over the falls.
There’s no second chance.

They ignored this sign, and then waded out into the water (repeatedly actually) ignoring the cries of other hikers to come back in order to get a picture, one slipped, then the next fell trying to help the first, and they fell in together. The third entered when trying to assist the first two. The rest is sad history. I won’t go into other details, you can use Google if you want to. They are tough details to read. I want to be sensitive my readers. 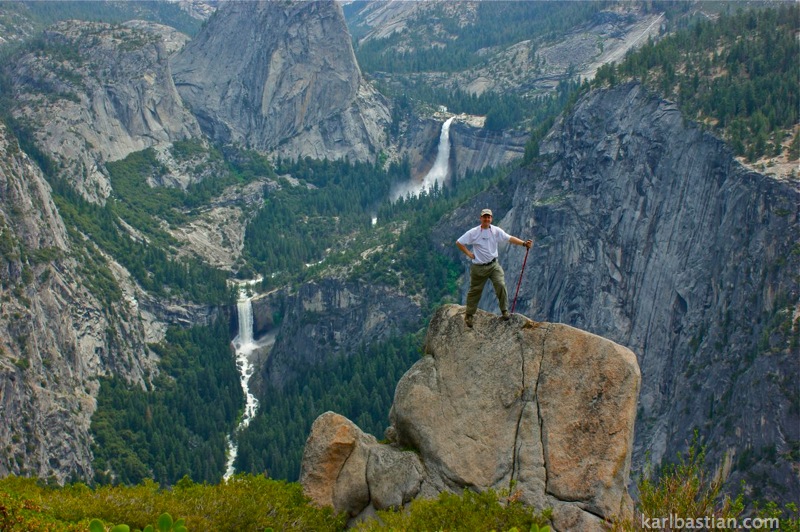 Vernal and Nevada Falls at Beginning of Panorama Trail

Everyone at Yosemite wants a great picture, but there are plenty of great pictures to get without risking your life. In pictures like this one above taken on Yosemite Summit – we enjoy taking pictures that “look” dangerous, when in fact, there was a meadow behind this boulder that slowly cascaded down the hill – though the picture looks like I am on top of a rock at the edge of a cliff! There are others as well, more humorous, but due to the sadness of this event, I won’t post them here. (Vernal Fall is the lower fall to the left of me.)

In the 600+ page “Off the Wall: Death in Yosemite,” which I have read to be prepared to keep my Yosemite Summit guys safe, most deaths are climbing related (we don’t climb), and of the rest nearly all of them are completely the result of carelessness on the part of the person who died or someone with them. So in answer to the question, “Why do you do a retreat in Yosemite when people die there?” My answer is, people don’t die there unless they make foolish choices – we won’t. You are probably safer in Yosemite than you are driving home from work. I tell the guys in our orientation, quite seriously, people do die in Yosemite every year. You have to take that seriously. BUT you can simply choose you won’t be one of them.

You do the math. You almost have to try to die. In other words, you have to do something foolish. Granted, you can’t avoid lightening (I know that!) but you can avoid most other things, if you are being wise and careful, and for the most part, sticking to the trail or to solid ground.

So, if you are considering coming to Yosemite Summit (or more likely, your husband is and you are concerned about his safety) please know, that Yosemite Summit is safe. We hike the trails, we use common sense, and we plan to come home to our wives and kids who we love very much. We all agree at the beginning that we will speak up if we see anyone doing anything we consider unsafe, and obey a request of another to not do anything anyone else feels is unsafe, even if we disagree. Our safety motto is WWWS, “What Would (my) Wife Say?” any time we are in doubt about climbing up or out on something for a picture. (It was WWSS the first year, “What Would Sara Say?”)

Yes, the deaths in Yosemite are tragic, and we grieve for the families and their loss. Our prayers go out to them. Reportedly, these three were Christians, that gives us extra hope. But their deaths do not make Yosemite unsafe – their deaths make foolish choices unsafe, wherever they are made, in Yosemite, in your work place, behind the wheel of your car. Life is precious and fragile.

Be careful, friends, people love you. See ya in Yosemite!